Understanding Grids A grid allows us to lay out our design elements and content in a simple yet versatile way, because all of the alignment, positioning, floating, even the clearfix, is already built into the grid system. And it’s usually responsive, so it’s able to adapt to any device or viewport size. The layout should be thought of as a set of rows and columns. Rows are what contain the columns and keep the grid in place. Columns keep things nicely aligned to the grid.

The grid itself is determined by some css like margins, widths, etc that you write ahead of time. First, we’ll determine the max number of columns we want in the grid, in this case 12. We need fixed pixel widths to determine how wide each of those should be, in this case 65px. Keep in mind that columns can span the width of multiple columns as long as they don’t exceed the max number of columns in the row.

Columns also have margins aka gutters that separate them from adjacent columns. We’ll give all but the first column in our grid a 20px left margin. 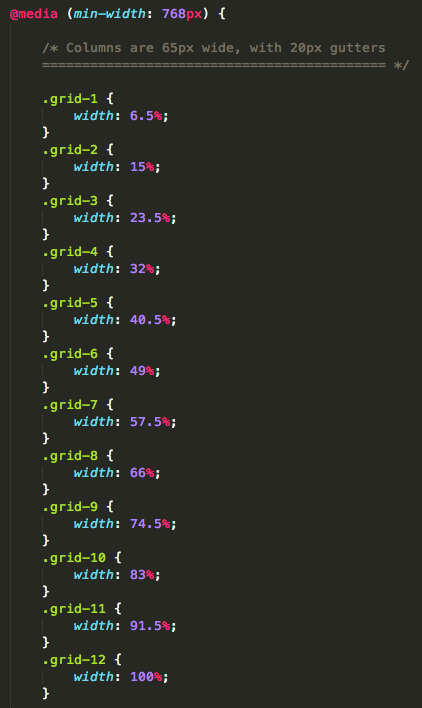 Notice .grid-12 is our max-width, which spans across the whole grid. Now anytime we want a column to span a certain number of columns, we can give it the appropriate class.

Creating the Grid Container Next we’ll create a new class .grid-container and give it some padding and margin to center it.

Then we need to set up the styles that will layout the columns in the grid container. We use a child selector for child elements of .gird-container with a class that starts with “grid-“, so any of the ones we created early. We’ll give them a float:left;, and since we’re using floats, a min-height to prevent them from horizontally collapsing. We’ll add some padding, then some margin. Earlier, it was decided that the left margin would be 20px, and to make that a percentage we divide by the total width 1000px, which gives us .020, then x 100 to give us 2%. 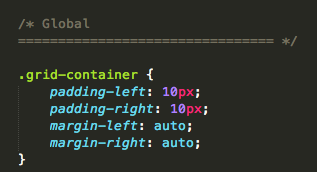 Lastly, we’ll make it so the last column always floats right, so it’s always flush with the right side of the page.

Now, we’ll need to do a clearfix to clear our floats, so the grid container won’t collapse. So, we’ll add it with an :after pseudo-element to build it into our grid. 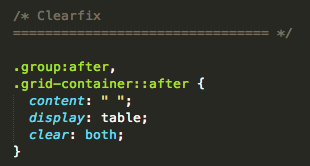 Testing Our Grid Now that all that’s set up, we can plug in some of these grid classes. We’re starting with this:

First, we’ll use them in our header. We’ll start by creating a div with the class “grid-container” to wrap it.

Next, we’ll make it so the logo spans 2 columns and the main-nav spans 8.

We’ll then give the .main-nav a text-align of right. Something is wrong in my test file I can’t figure out so I’m using theirs.

Next we’ll do the columns. We’ll give the containing div the class .grid-container, then give the child divs the appropriate grid classes. We’ll have them total to 12 columns, making them nicely take up the whole width.

To add a new row of content, simply repeat the process and give the parent div the class .grid-container and the child divs the grid class based on how many columns you want it to take up.

Now, we’ll want to prevent our layout from getting too wide on larger viewports widths. We’ll add a new media query for that, and make it so that if the screen is at least 1200px wide, the .grid-container’s max width will be 1100px. Just like a normal wrapper we’ve done a bunch of times before.

Next, we’ll create a visibility class that hides elements in mobile devices with a preexisting media query. We’ll add a new class called .hide-mobile and apply it to the elements we want to hide on smaller viewports.

And just like that, I’ve finished the CSS sections. I can’t believe I finally got this far. I started the treehouse courses on April 11, 2014, and now, just 80 days later, I’ve crushed the lessons and am onto Javascript. When I started the CSS foundations it seemed almost impossible, so much to learn and go through. I’m really proud to have gotten this far, but there’s still a ways to go.